It is incredible to realize that EBA has been in existence now for 20 years. Who of us would ever have imagined that, in those early days, we would have grown as strongly and as globally as we have done? Our growth, and the direction of that growth, has been completely determined by the interests of those who have participated in our events over the years. Who would have thought, for instance, that an initial conference held in 2004 specif cally for university rectors would have developed into a dedicated division of EBA attracting membership from a multitude of international university leaders? Or that an early focus on health and wellness tourism would have grown into an annual event based in the Alpine regions of either Montreux in Switzerland, Stressa in Italy or the Mediterranean jewel of Malta?

Along the way we have also occupied some truly prestigious locations such as the Lividia Palace at Yalta, in the very rooms that Stalin, Roosevelt and Churchill debated the future of Europe during their 1945 conference. Equally awe inspiring was an event held at Christ the Saviour Cathedral in Moscow, or, on a regular annual basis, our spring conferences held in the former London palace of the Duke of ellington, hero of the battle against Napoleon at Waterloo.

Of course, we cannot forget the city of our birth, Oxford, a city in which we have occupied many prestigious buildings, including the Town Hall, St. John’s College, and the Oxford Union debating hall.

From small beginnings we have grown into a multi dimensional organisation with specialist focuses in economic issues, education, and leadership development. Our congregation has grown from one initially drawn from within central and east European countries to one that now represents the whole world, each of our events include representatives from more than 40 countries. What, you may ask, of the future? Well, that, we assume, will follow a pattern similar to the past in that it will be dictated by our members and attendees and the nature of their particular interests. One thing is certain, however, in following our members’ interests we will also be following them to their particular parts of the world and holding events in ever more exotic locations. I am looking forward to seeing you there – wherever 'there' may be!

Foundation in Oxford of the Europe Business Assembly (EBA) - an independent corporation for economic, social and humanitarian collaboration.
Signing of a memorandum of joint support with EMRC (Belgium), ICIE (Russia), British TVCC (UK) and other inﬂuential international organisations. 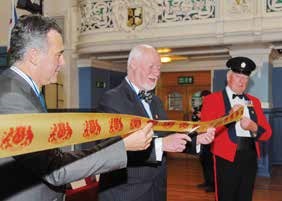 In honour of the Day of Russia a reception for leaders of economy, science and culture was held by G.M. Selezniov, Chairman of State Duma Federal Assembly of RF, Moscow, Russia.
Economic forums for the leaders held in Belgorod, Russia; Damascus, Syria; and Antwerp, Belgium.

History of Socrates Ceremony
The Second Congress of Leaders from 26 European countries was held at the Romanian President’s palace in Bucharest.
International economic forum entitled “New Europe in the EastWest dialogue: integration and development”, held in Neiredhaza, Hungary.
The f rst Summit of Leaders took place in Oxford (UK). Subsequently Summits of Leaders have been held in Oxford every year, in the spring and autumn.
An International Forum of Leaders took place at the British Institution of Managers in London, UK.

History of Windsor
Business visit to Geneva, Switzerland.
Ceremonial reception devoted to celebration in honour of Anna, the daughter of Yaroslav Mudry, the queen of France in the XI century, held in Senlis, Paris, France.
Joint economic action with TPP in the Thames Valley (UK) Windsor debates held in Windsor, UK.
Meeting of the President of the International Congress of the manufacturers and business owners, V.K.Gluhikh, and the General Director of the European Business Assembly, John Netting, with leaders of business, science and culture in Moscow, Russia.

John Netting, the General Director of the European Business
Assembly met G. Berdymuhamedov, the President of Turkmenistan, in Ashkhabad.
Eliz Bendjamin, the Lord Mayor of Oxford, held a summit devoted to new models of management for a modern city. Mayors, heads of administrative regions, city managers and scientists from 27 countries of the world took part.
Leaders business visit to Montreux, Switzerland.

Yearly summing up of the rating of business activity, entitled “Achievements-2012”, was held at the British Institution of Directors, London UK.
Presentation of investment projects held in Dublin, capital of Ireland. Meeting opened by N.Murrey, Lord Mayor of Dublin and businessmen and investors from 24 countries took part in the forum.
John Netting, the General Director of the EBA, went to Islamic Republic of Iran for a working visit. Meetings with spiritual leaders and well known politicians and businessmen of Iran took place.
The autumn Summit of the Leaders was opened by UK Member of European Parliament Derek Clerk. Participants from 32 countries greeted Lord Digby Jones' speech at the summit with a storm of applause.
On Christmas Eve of 2012 a Great knightly ball took place in Vienna in emperor’s Hofburg. The ball was opened by Johan Gabsburg Salvator, a descendant of France Josef, the emperor of Austria.
Vil Goodhair, president of European Rectors Club in one of the best universities of Nigeria named by Afe Babalola opened a scientific symposium on the problems of education. 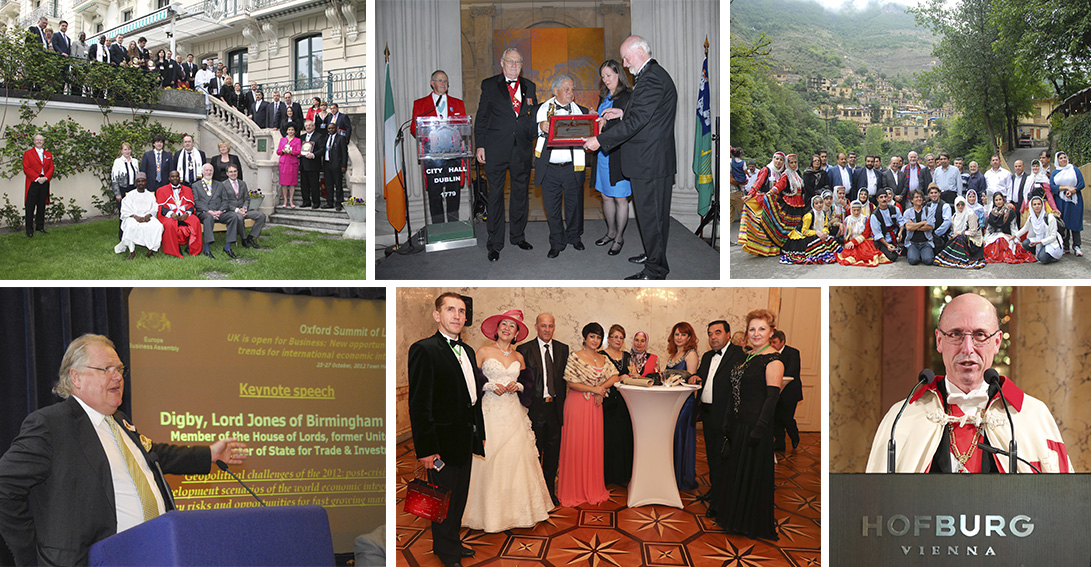 History of IoD
The traditional London Summit of Leaders took place in the British Institution of Directors, in London, UK. The forum was devoted to the presentation of prospective projects with the aim of investing in them.
The Third International Summit of Leaders of health protection - Swiss Summit of Leaders took place in Montreux, Switzerland.
The Oxford Summit of Rectors has become a highly respected event in science and education. The intellectual programme of the forum: the conferences, debates, round tables discussions and exhibitions were highly praised by attending specialists.

This year’s events calendar was opened by the London Summit of Leaders 'Rapid Urbanization: Economy, Society, Management'.
During the two day event participants discussed the latest industry trends, saw unique presentations from over 50 international presenters and shared experience and best practice.
The Summit recognized industry leaders with prestigious awards and announced the winners of the competition.

Achievements Forum, 21 April 2015, London, UK
The Achievements forum is an interactive platform for international collaboration. The event is attended by businessmen, fnanciers, diplomats, leaders of chambers of commerce, business associations, business and professional unions from more than 60 countries.
During the Achievements forum we will announce winners of prestigious international awards and honour the world’s leading companies and its CEOs for their outstanding successes in business, economy and social progress.
The priorities of the organizers are to direct business partners towards companies with modern management and reliable business reputation for cooperation. The authorities and communities wholeheartedly support the initiatives of EBA award winners aiming to transfer technologies and exchange best economic practices and new knowledge.

The Best Medical Practice Project (30-31 January, Dubai, UAE)
European Medical Association, Belgium and EBA continue implementation of the joint initiative, as an international professional networking platform for sharing of experiences and best practices in healthcare and medical travel.
Achievement Forum 2017 (28 March, London, UK)
The event provided an authoritative multicultural platform for fresh thinking on CEO`s role in companies achievements and regions development, investing to the progressive regions, territories and businesses.
International Investment Conference ‘Lithuania Is Open for Business’ (15-16 May, Vilnius, Lithuania)
Aiming at introducing members and partners of EBA from 15 countries to the great economic and cultural potential of the European Union country, the event provided an overview of investment possibilities and business immigration opportunities of Lithuania in general.
Excellence in Quality Forum (3 July, Lucerne, Switzerland)
International Conference ‘Excellence in Quality’ gathered together more than 200 regional business, professional and academic elite representatives from 52 countries.
Also there were a number of training sessions and aqacquiring special consultative status with the United Nations Economic and Social Council (ECOSOC) (27 April, 2017). 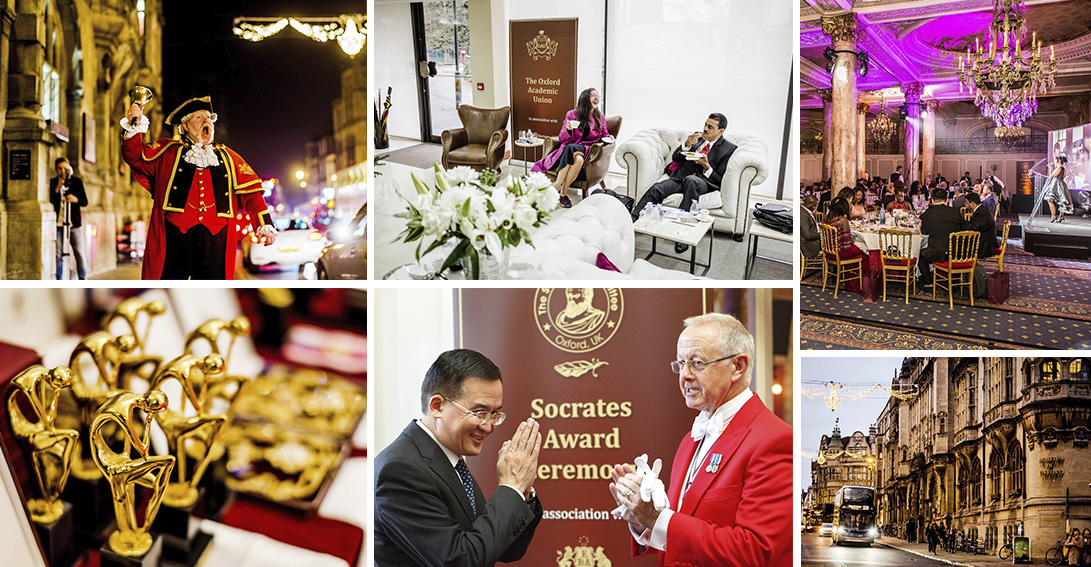 Furthermore, a series of training sessions for business, education and healthcare executives was held in the Academic Lounge, Oxford.

And of course social activities, so typical for EBA were not left behind: Attendance of Bi-Annual meeting with Mr Michael Møller, Director-General of the United Nations Office at Geneva as the organization with the special consultative status with the ECOSOC (30 October 2018) and launching the state-of-the-art Conference Room (The Library) in Central Oxford, fully equipped modern facility which is frequently visited by top international businessmen, city mayors and heads of states.

The publishing and media work was well under way too. Two applications were created to improve the communication possibilities for our members: Mobile App ‘EBA Global’ and ‘E-commerce EXPO’ classifieds portal. And, in addition, the Socrates Almanac Editorial Board collected and prepared carefully the wealth of information for Exclusive Edition ‘World Awards in Masterpieces of Timeless Art’ which not only provides information about the unique prizes of European royal courts, aristocratic clubs, knightly orders and individual religious denominations, but also presents pictorial, sculptural and photographic works from well-known treasuries of world culture. 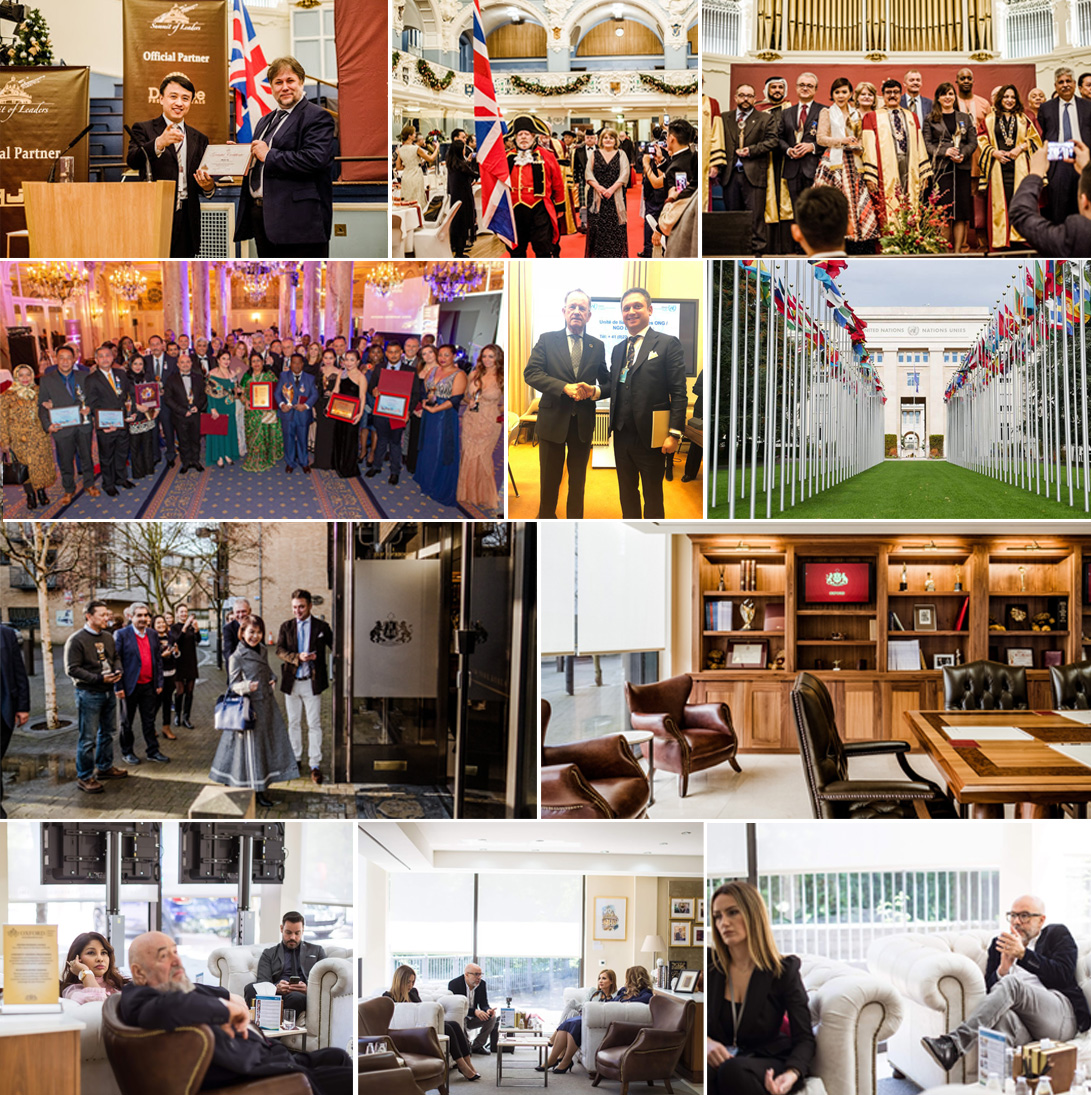 The first month of 2019 was already very fruitful for the Europe Business Assembly. On January 21, the EBA headquarters hosted a landmark meeting of EBA Director Ivan Savvov and President of Malta Marie Louise Coleiro Preca. Based on the results of a meaningful dialogue, it was decided to create a Maltese-British center for business and cultural cooperation on the basis of EBA. 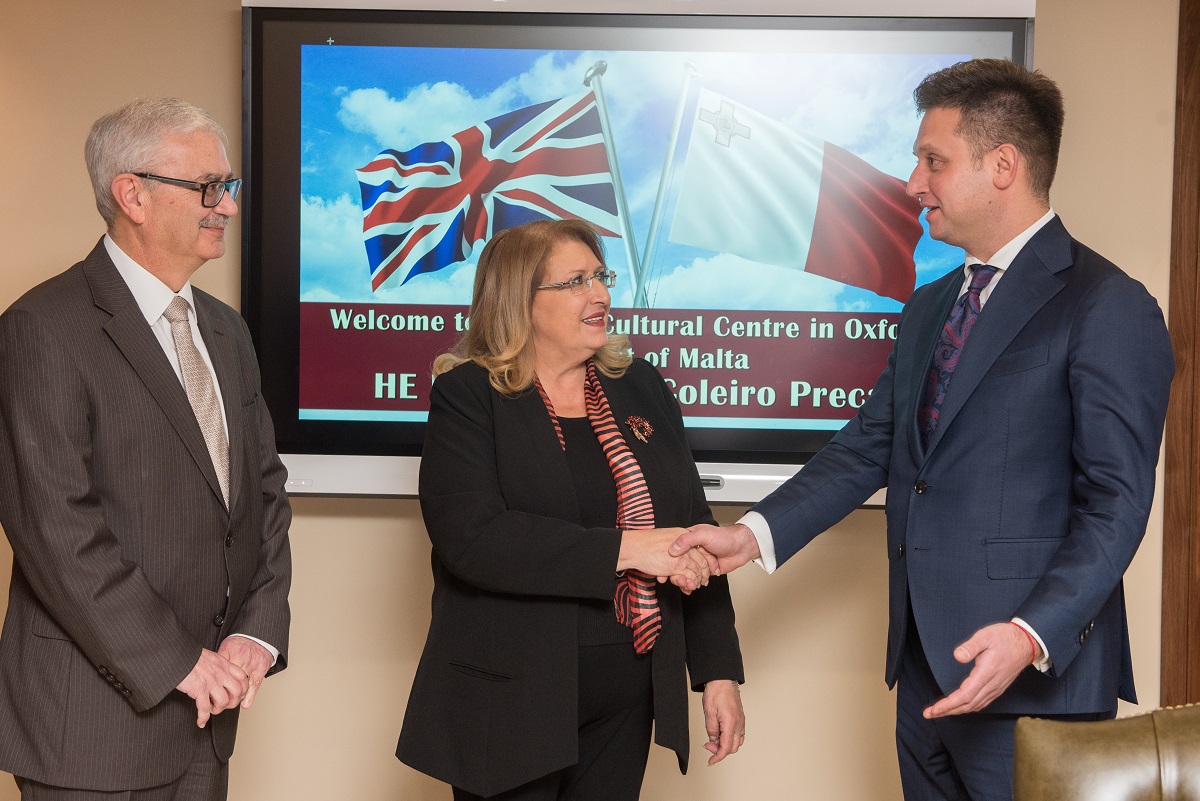 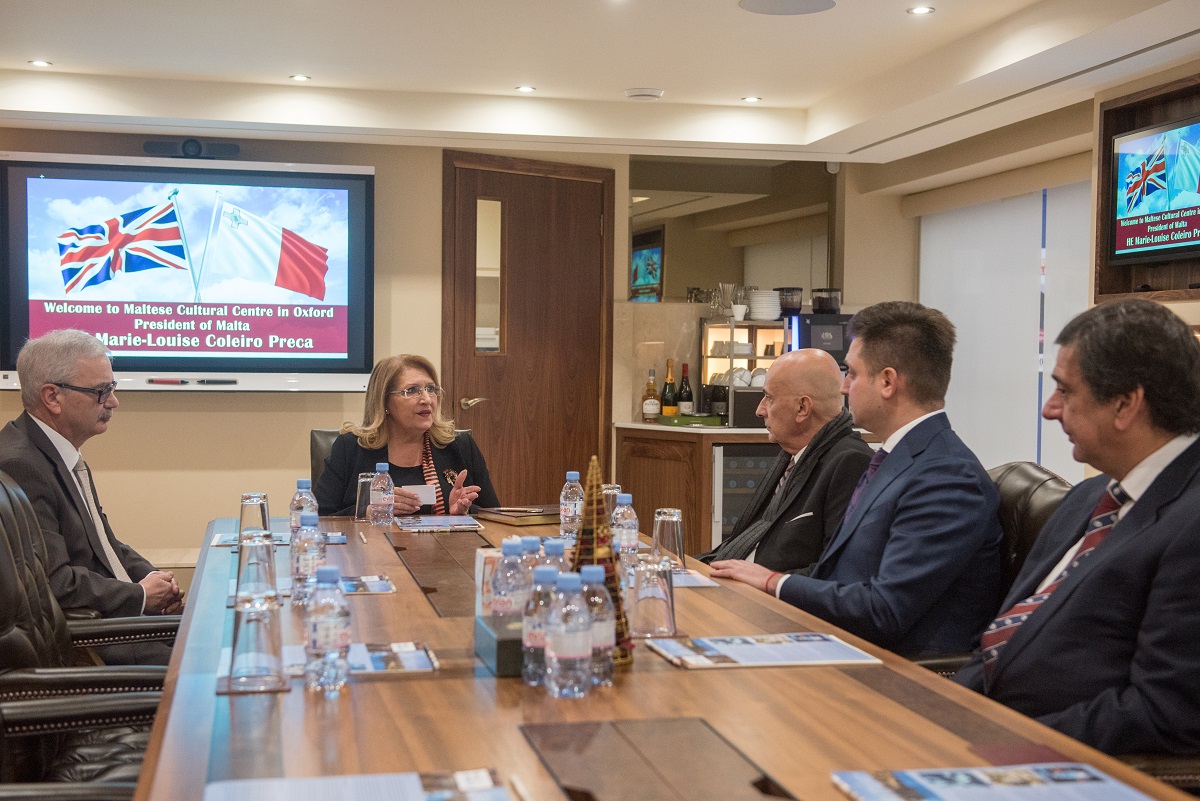 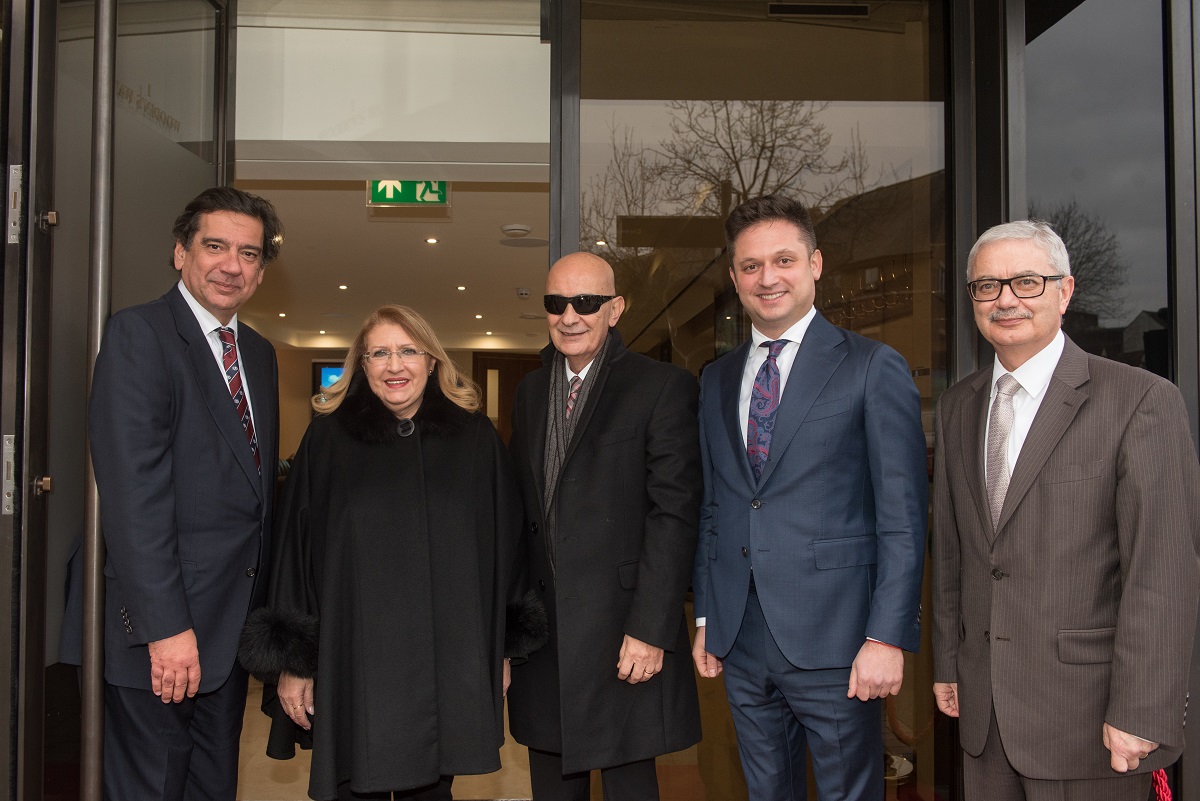 On April 12, the Summit of Leaders, which gathered delegates from 37 countries under its banners, was held in London. The Summit ‘Achievements-2019’ was dedicated to honouring the best world teams and their leaders. The presentation of the book ‘World awards in Masterpieces of Timeless Art’ (UK) was one of his highlights. 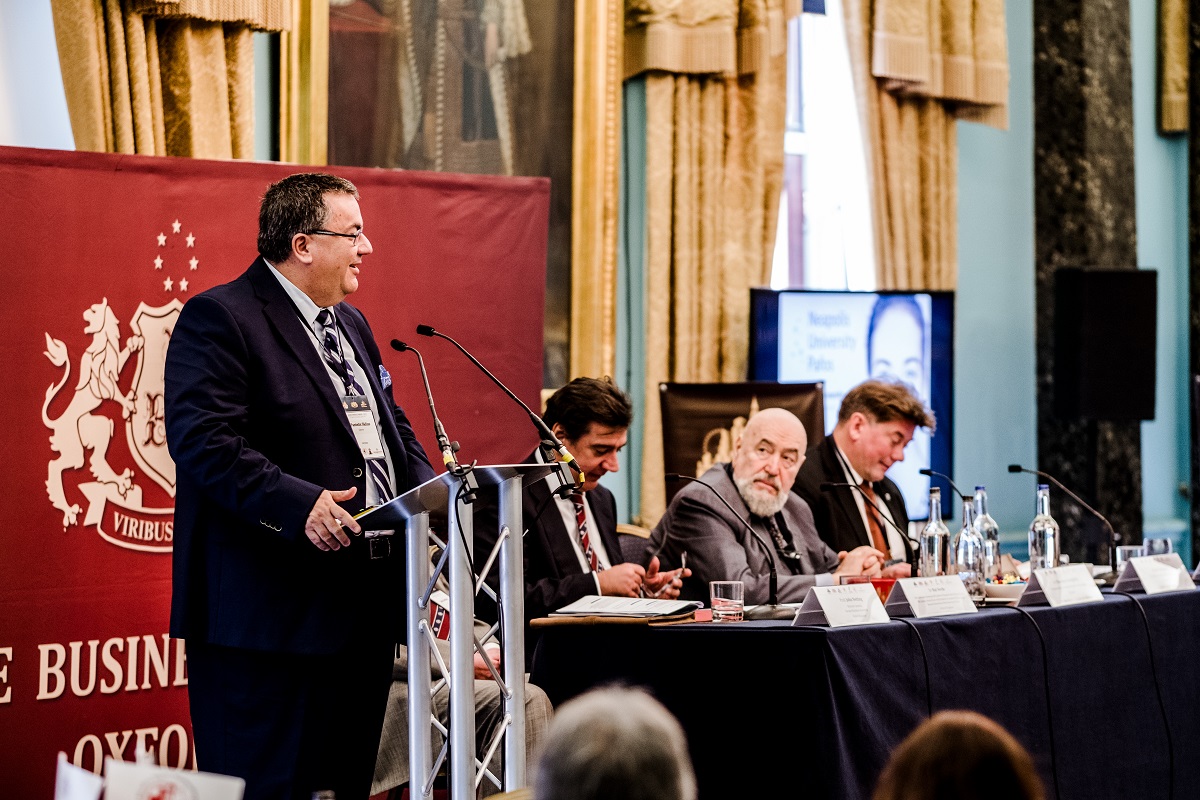 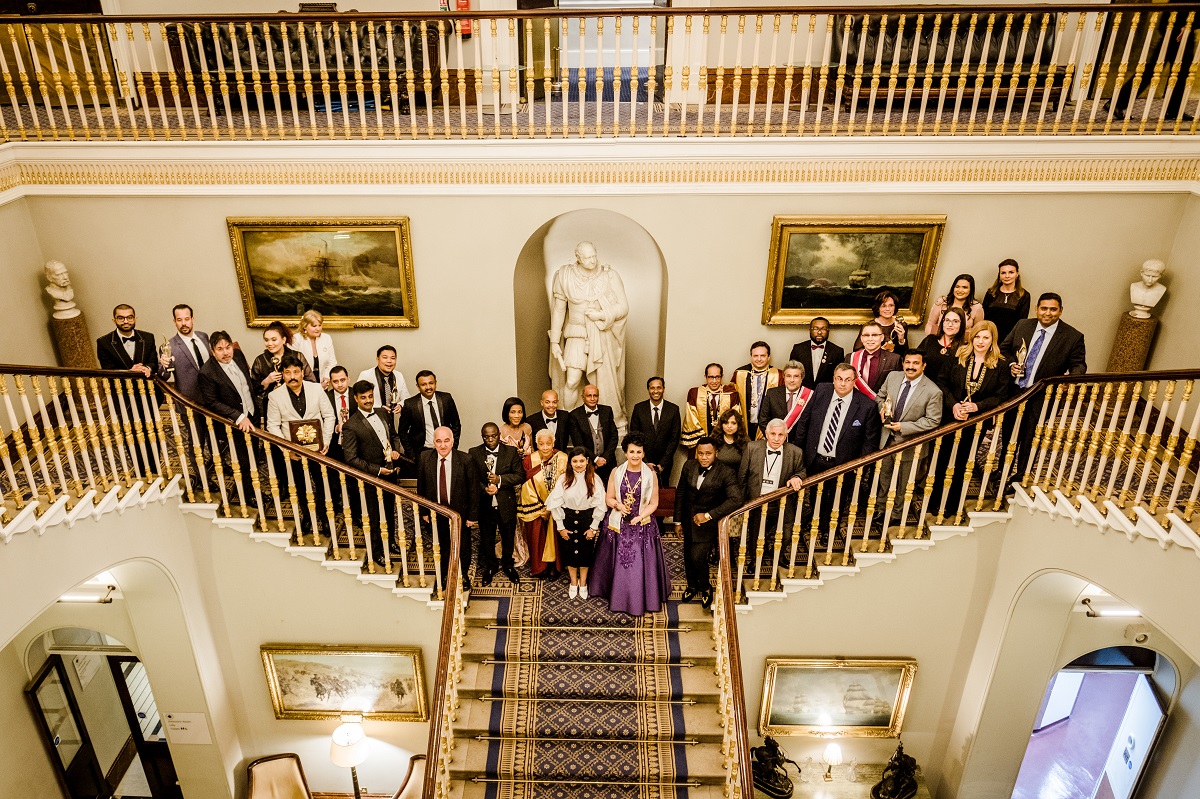 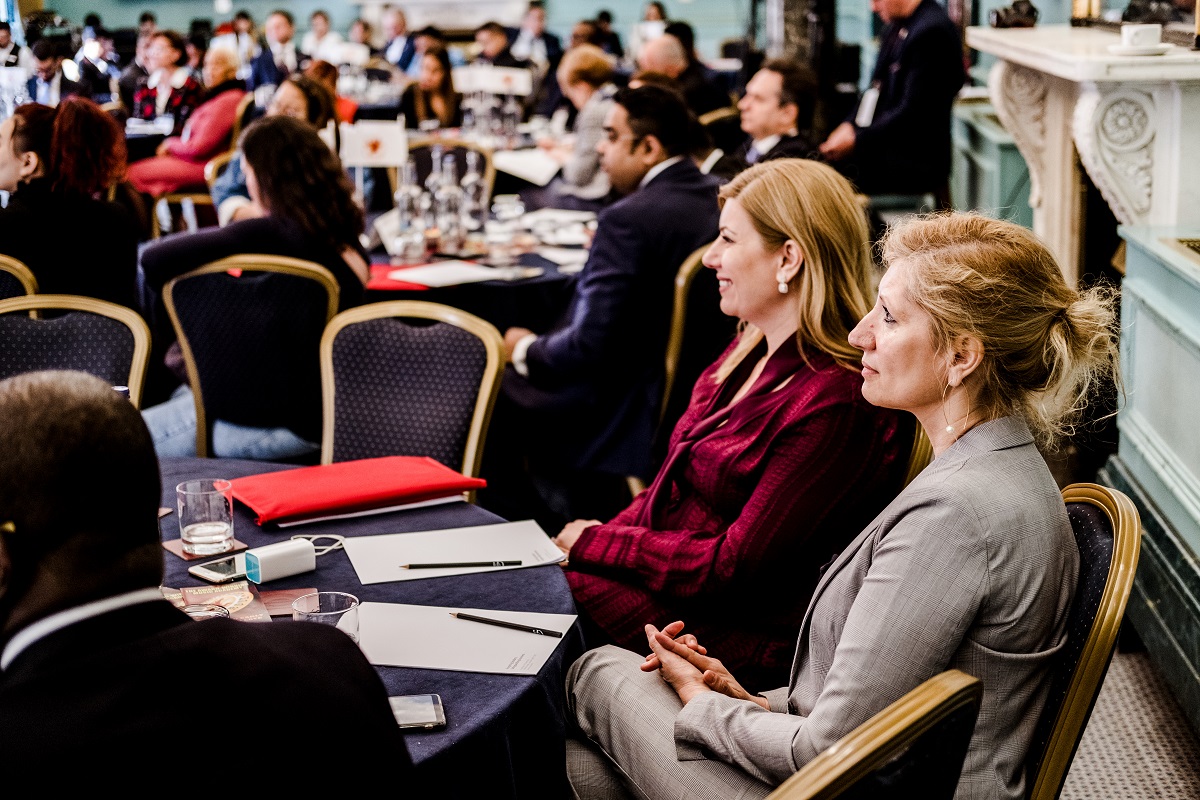 On April 12, 2019 at the Achievements Forum in London it was decided to create the Anti-fake news Investigation Agency (AIA) under the auspices of the Academic Union, Oxford, UK. Leaders of business, science, and education from 54 countries all over the world signed the Resolution on the creation of the Agency to protect society from unscrupulous journalists. 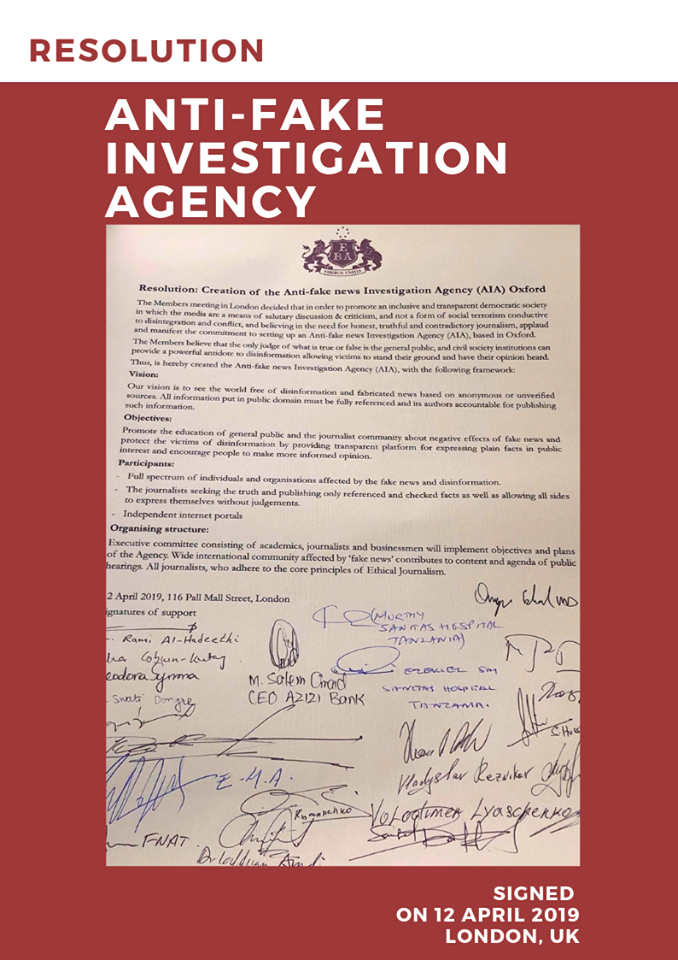 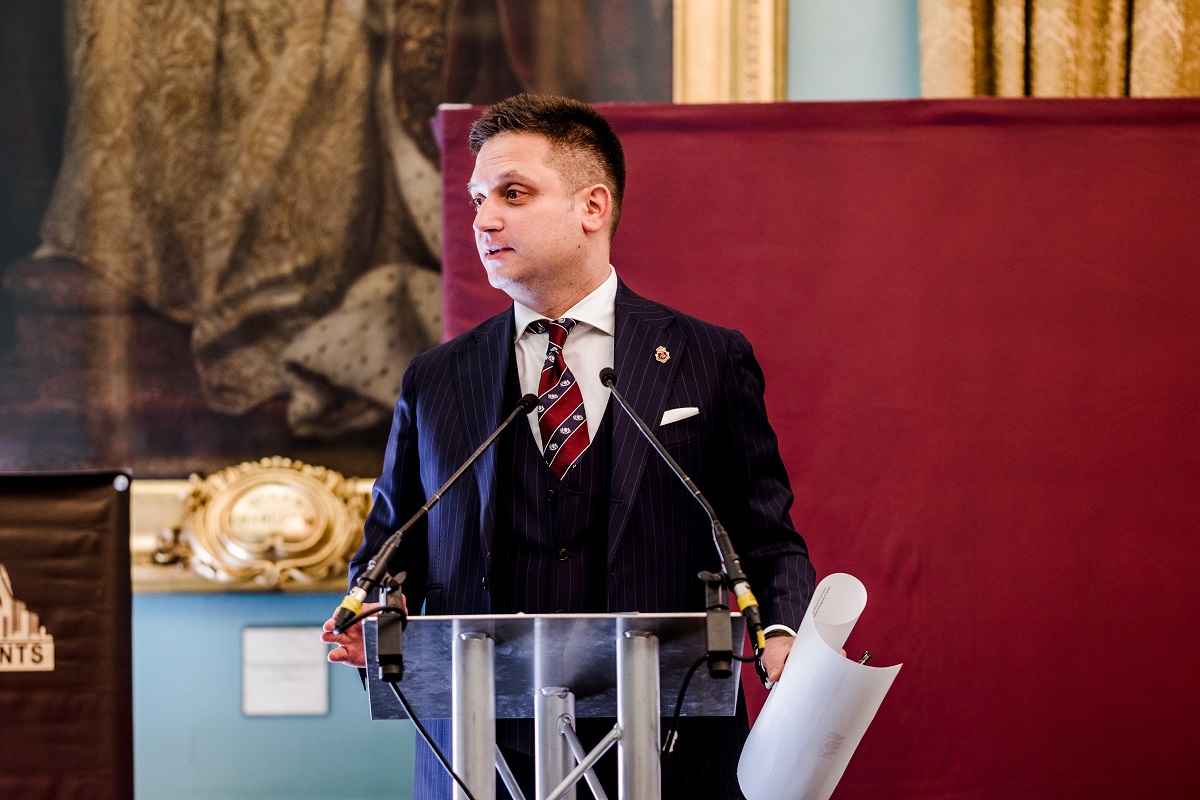 On May 23, the world's best scientists and education managers gathered at the Oxford Academic Lounge for a debate. The debate's top topic: the future of education in the modern world. The debate was in VIP format and was broadcasted to 54 countries. 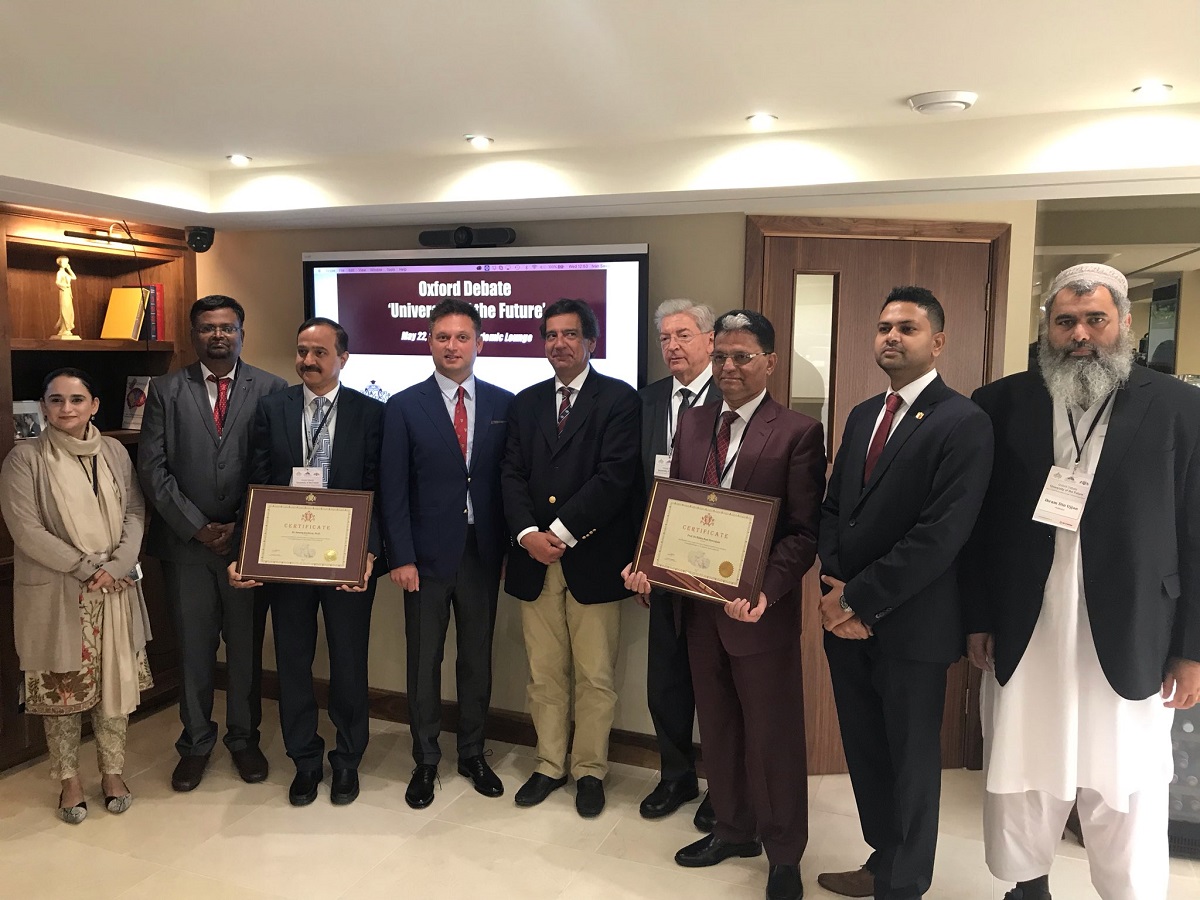 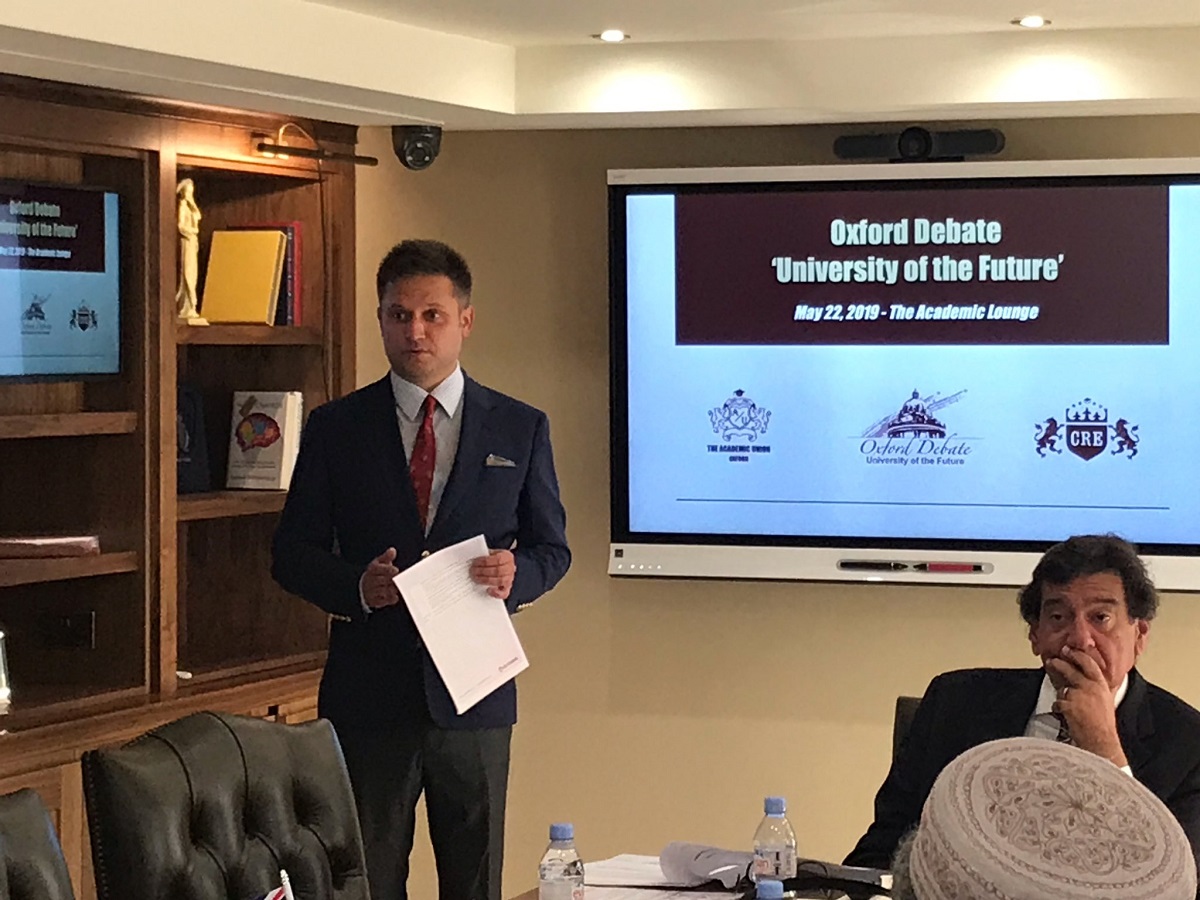 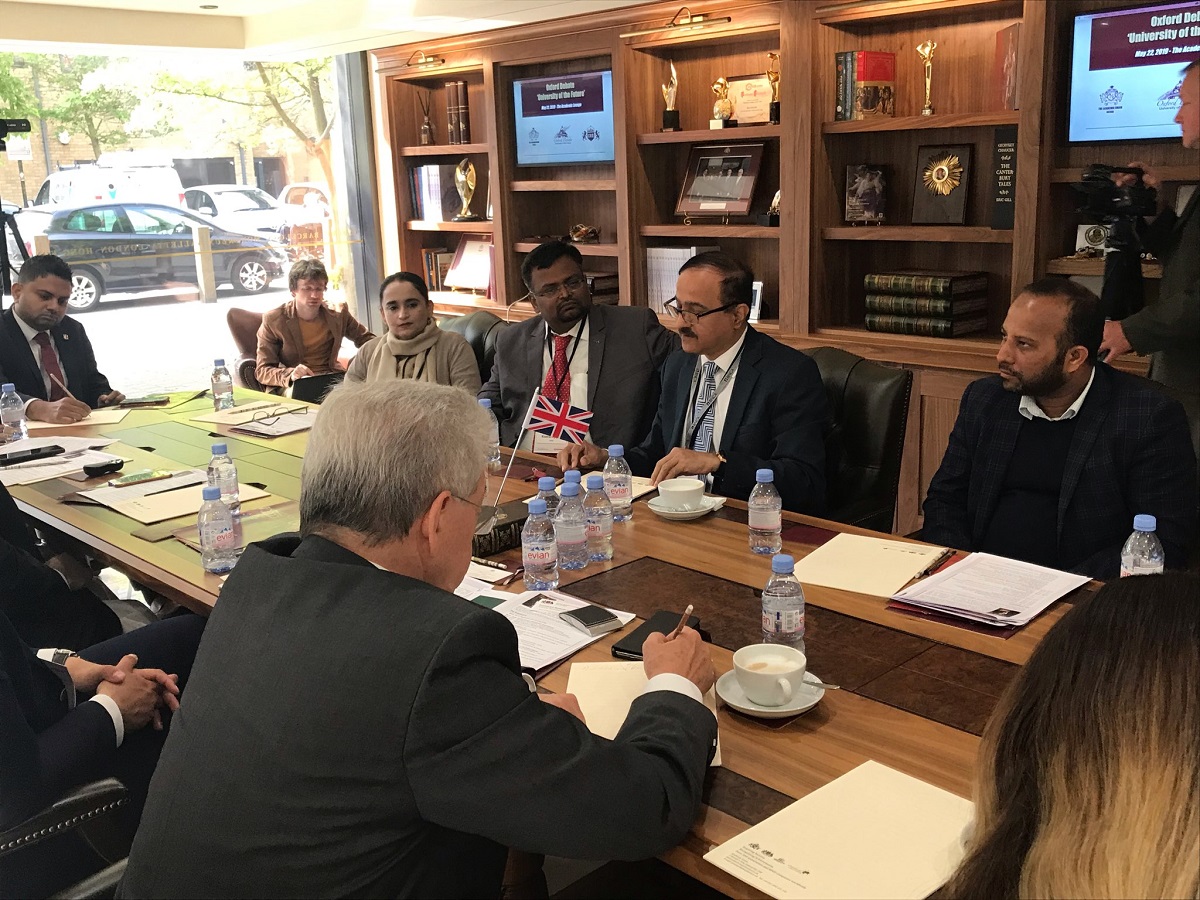 The conference of the European Medical Association and the Europe Business Assembly ‘Best Medical Practice’ was held in the capital of Georgia, Tbilisi from June 2 to 5. 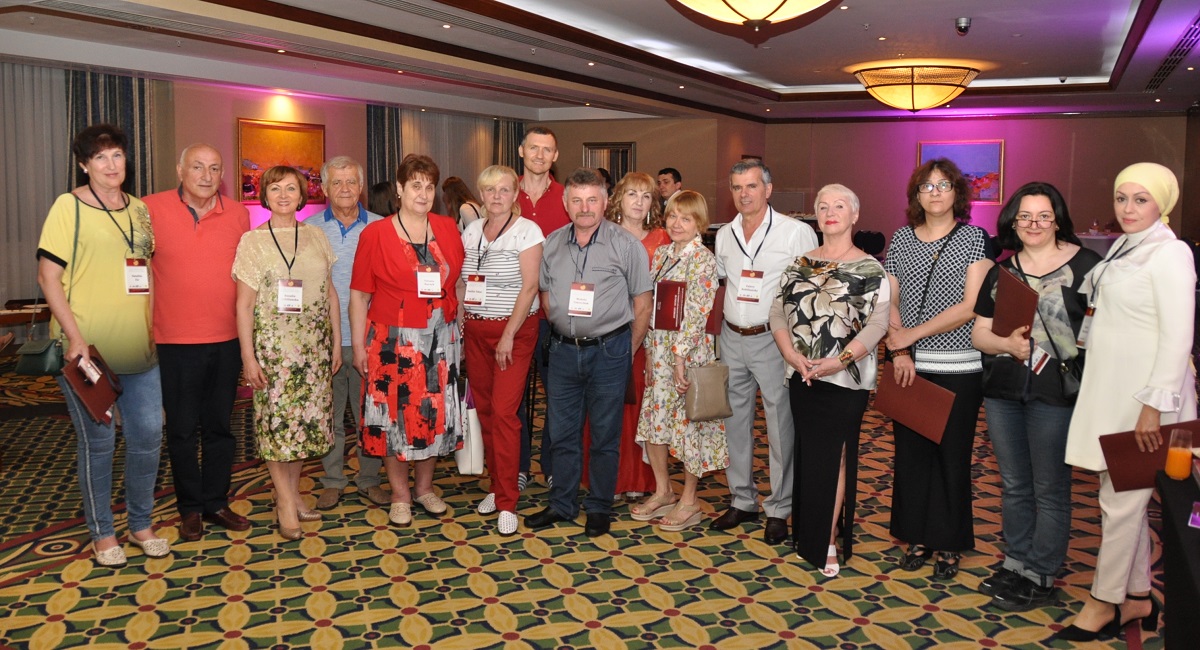 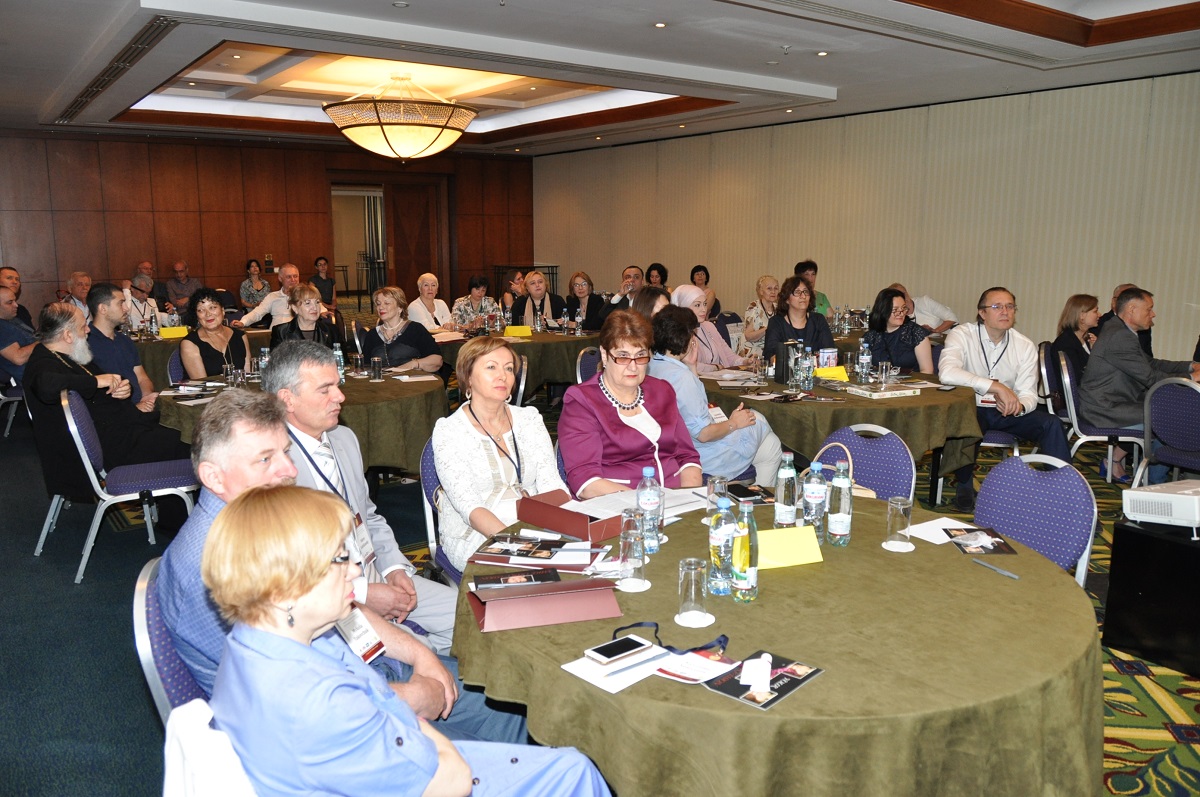 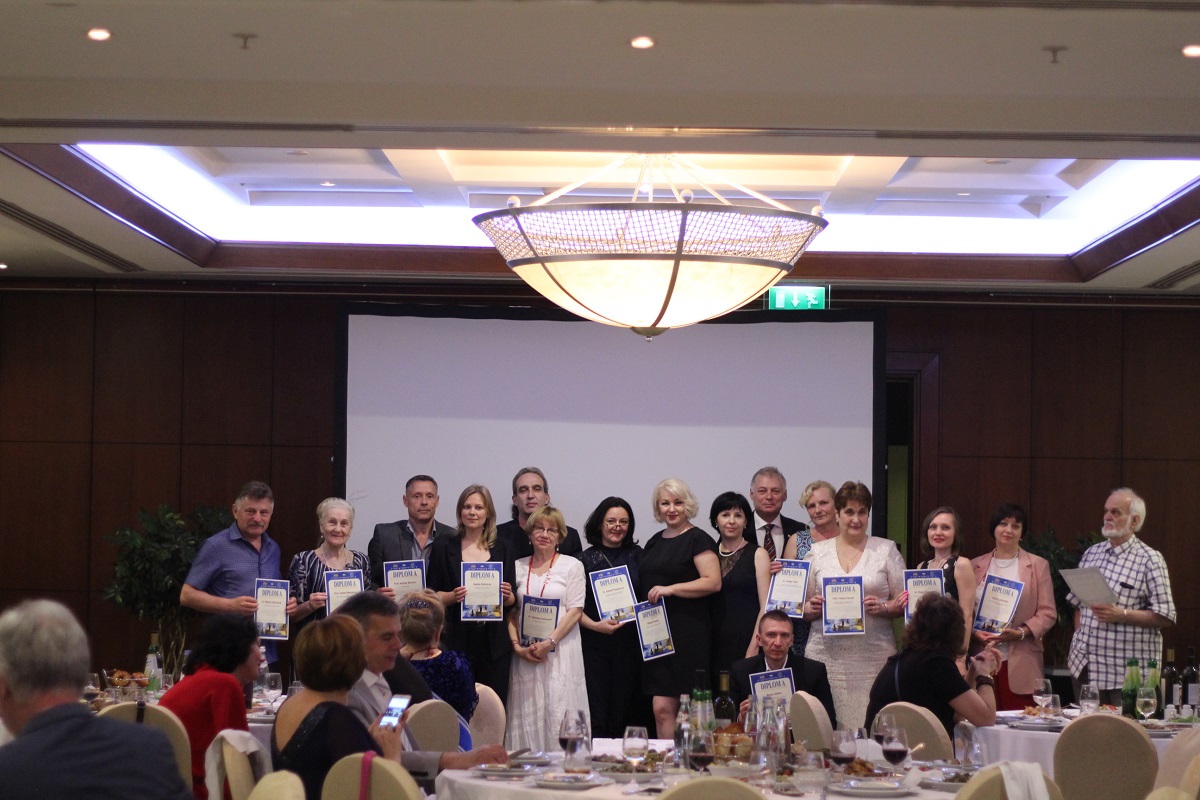 On 28 June 2019, EBA, as the institution with Special Consultative Status to the United Nations Economic and Social Council (ECOSOC), organised Public hearing ‘CSR as a priority of Regional business transformation: Multiplicity of CSR advantages to work on long-term perspective. Adopting the CSR policy which reflects public interests.’ It was the first event, conducted by EBA in UN office in Geneva – Palace of Nations.

The Public hearings in Geneva started new directions of events, organized by Europe Business Assembly as the institution with ECOSOC Special Consultative Status. 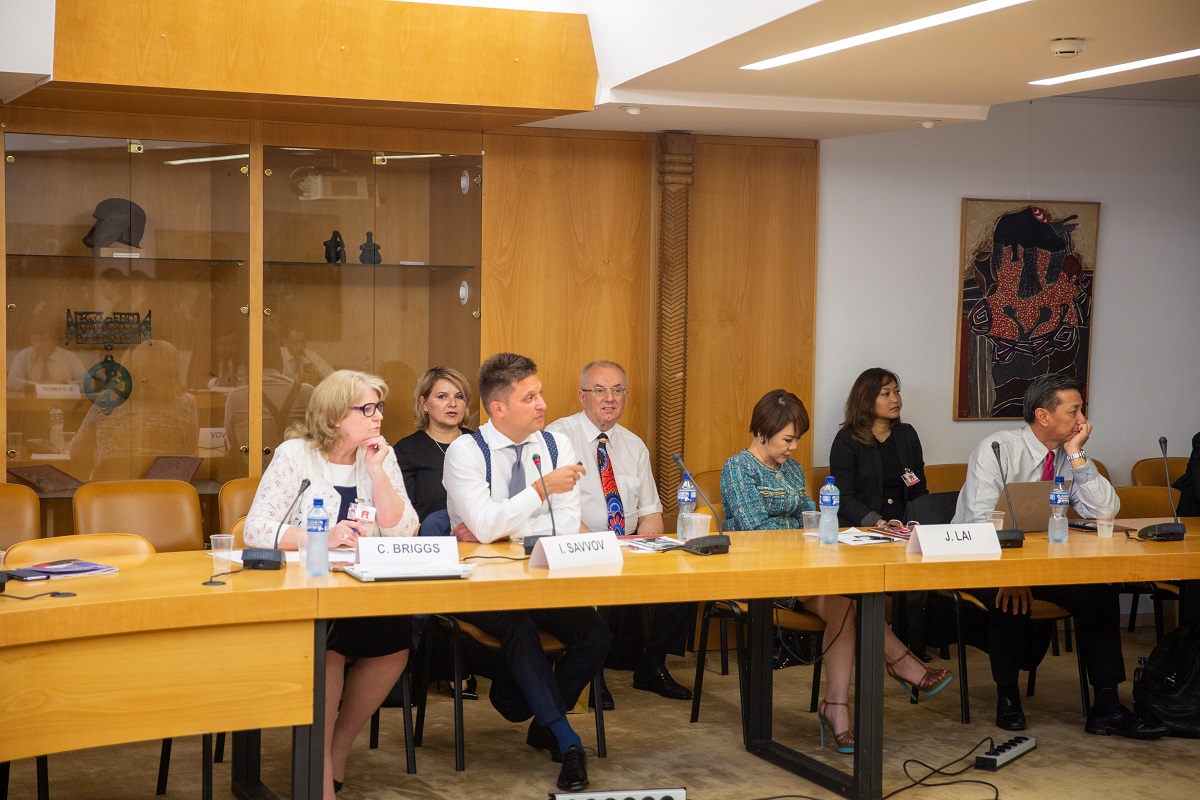 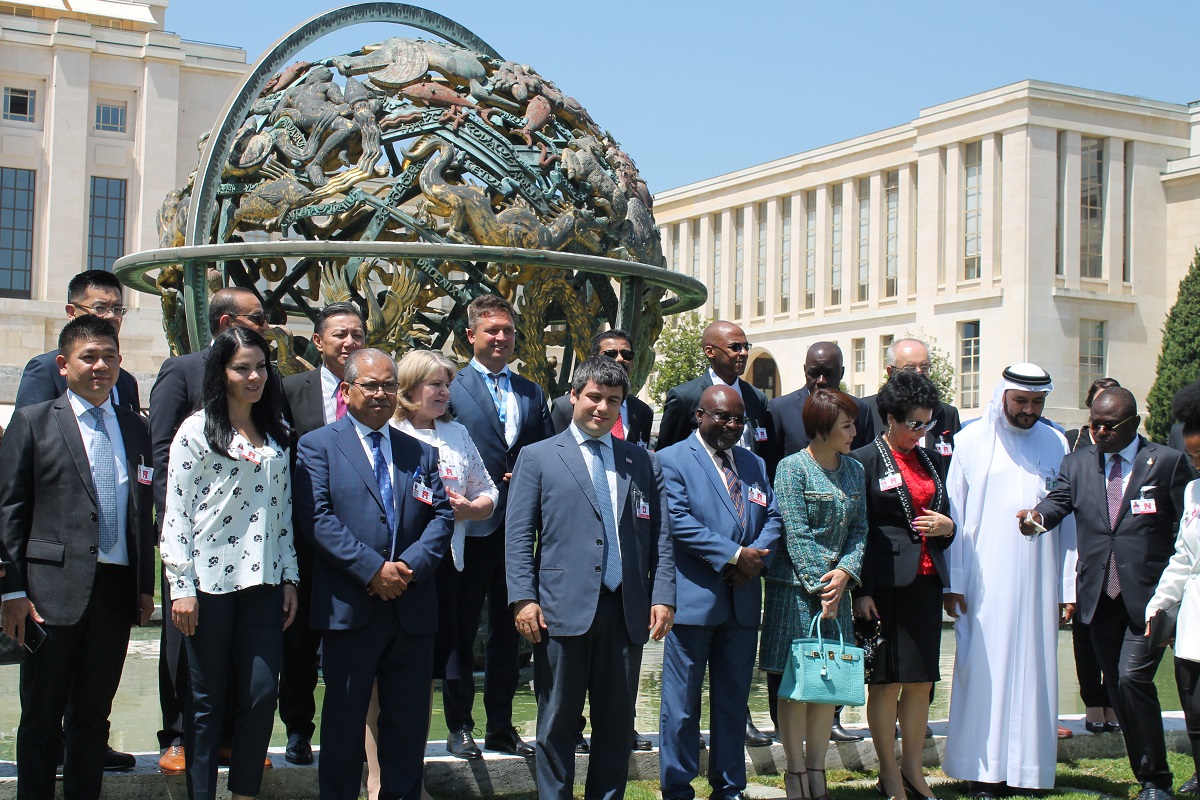 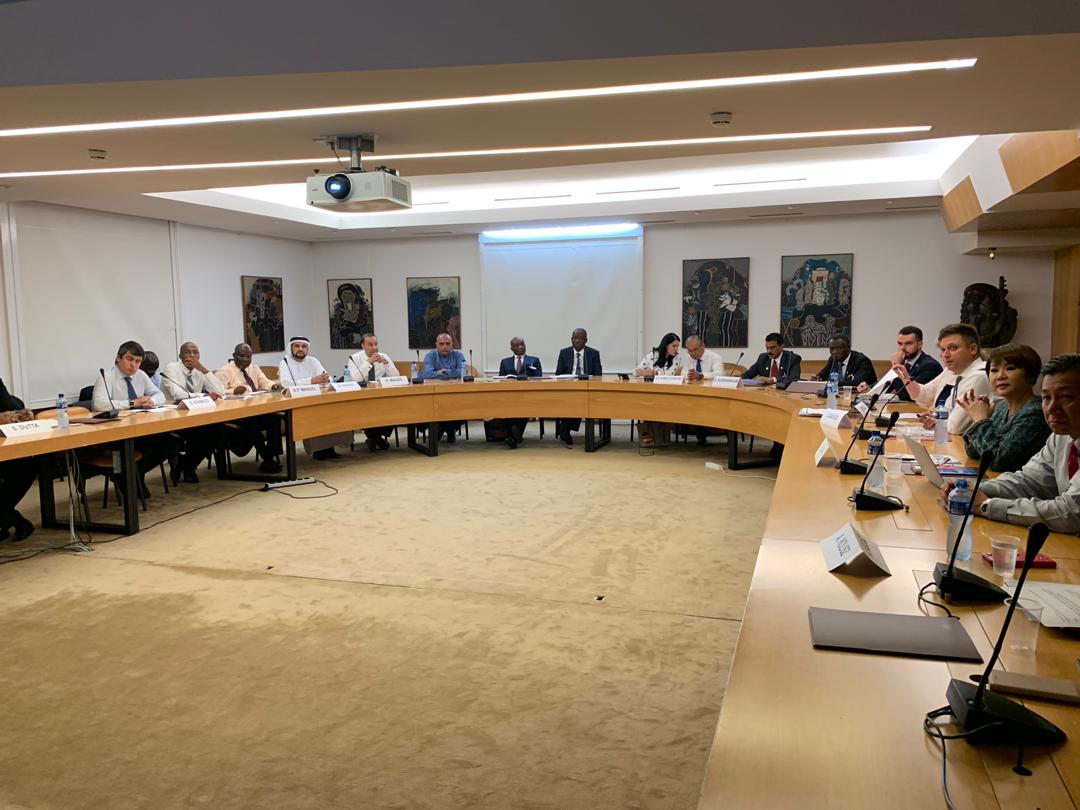 On July 2, the Europe Business Assembly and its partners held a large-scale and representative Achievements Forum in Milan, among members were famous figures and leaders of science, industry and business, representing more than 40 countries of the world. 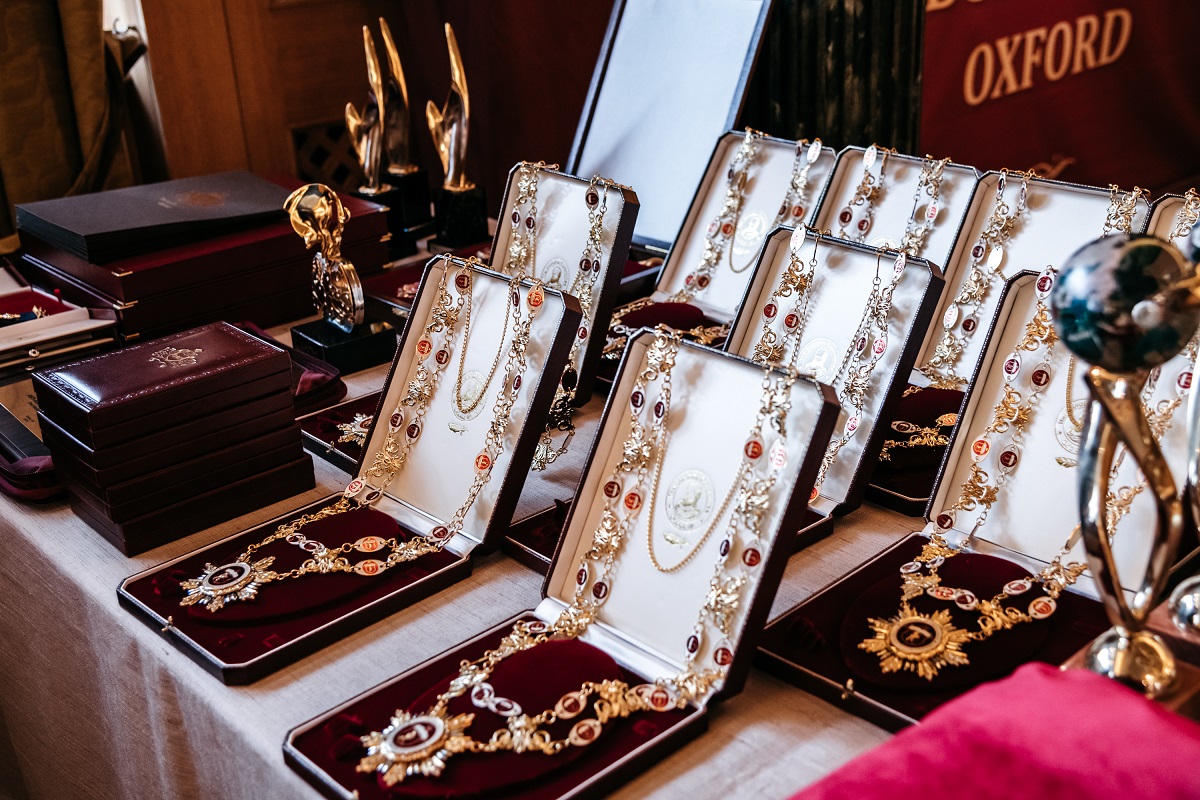 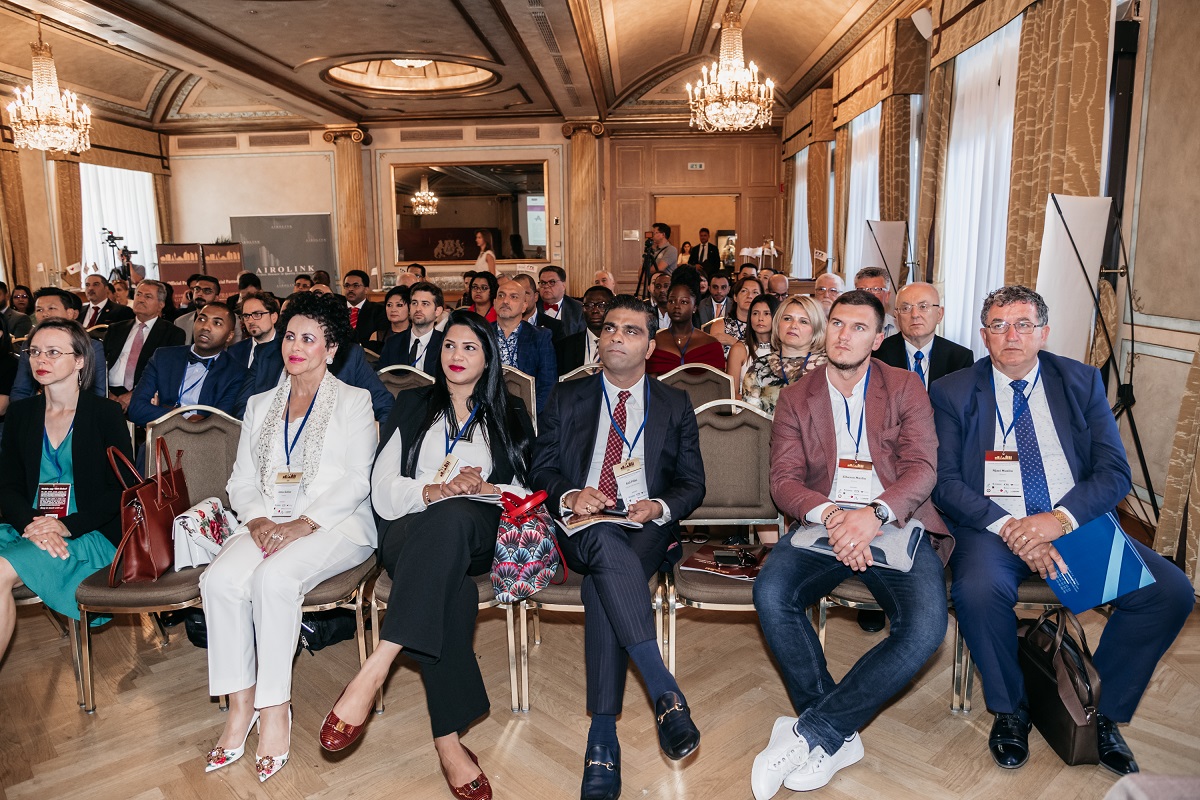 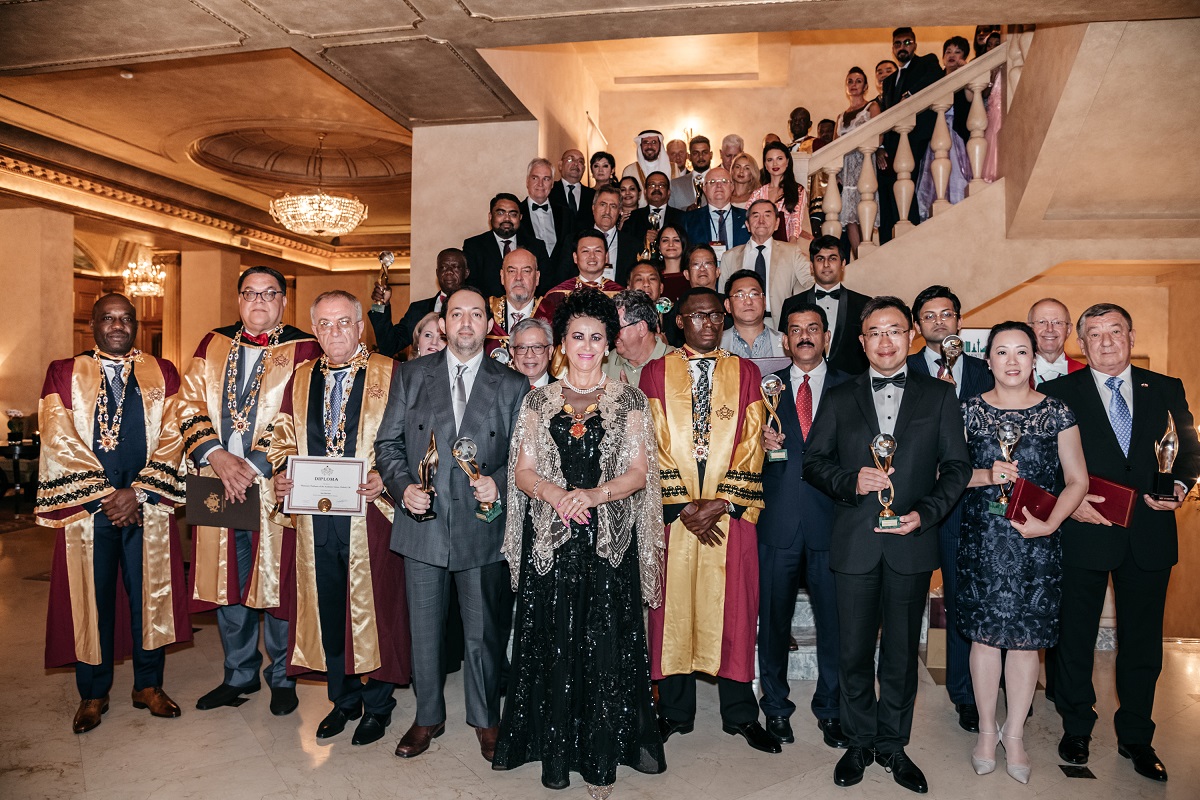 On September 1, the EBA Publishing Center ‘Media’ released the collection of speeches of higher education leading experts 'Oxford Debate 'University of the Future'. 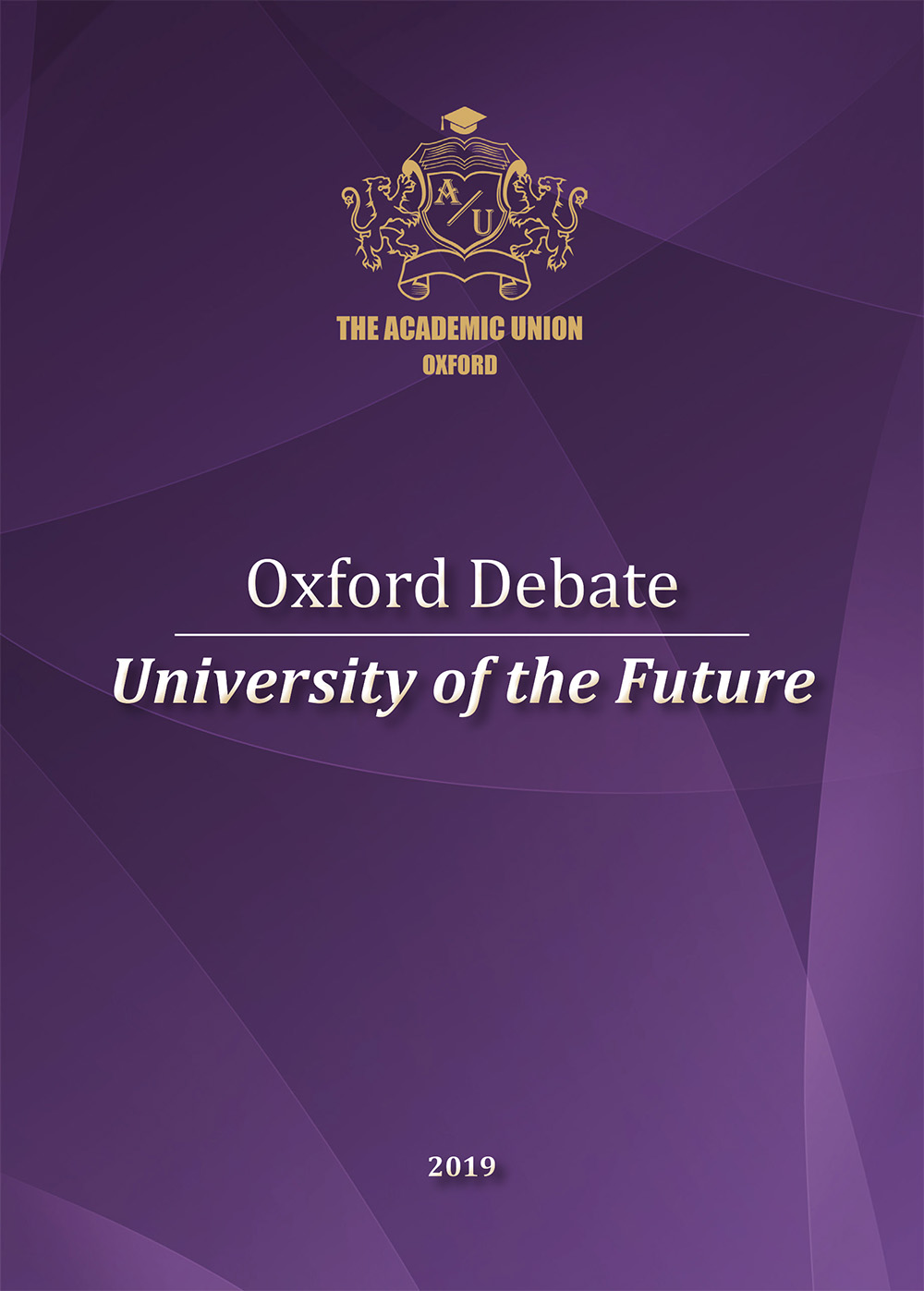 4 October, Excellence in Quality & Management Forum in Cannes, France has proven to be a valuable and effective gathering of corporate leaders and organizations from all over the world. 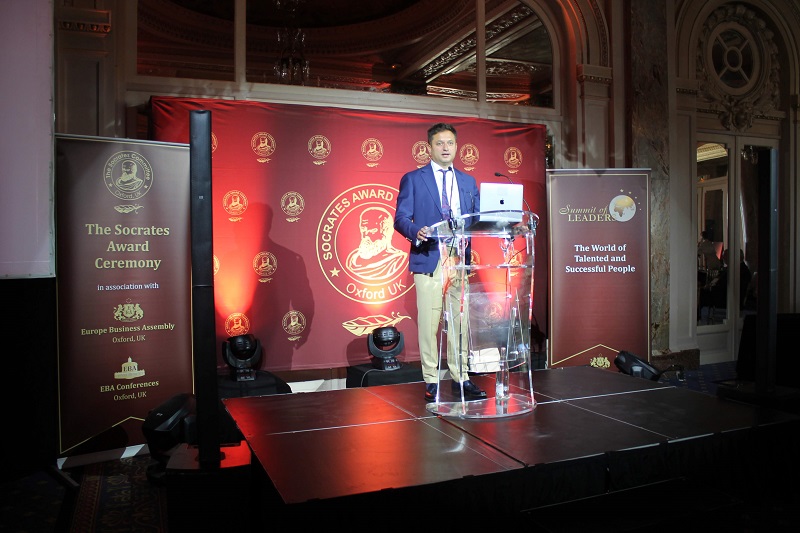 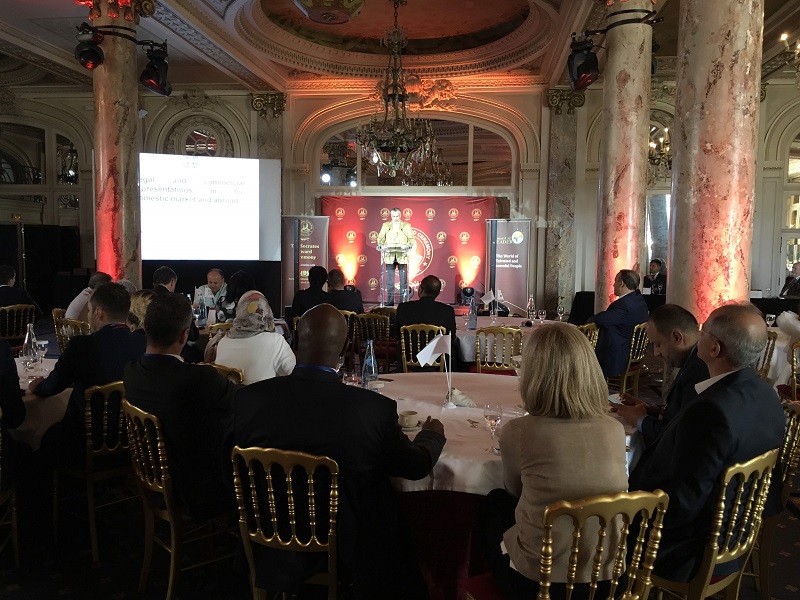 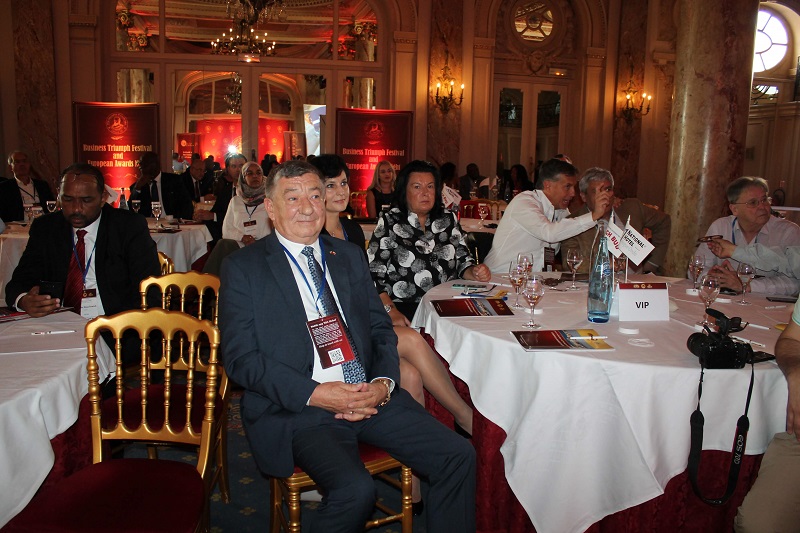